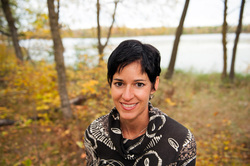 Dr. Beverly Everett is Music Director of the Bismarck-Mandan Symphony Orchestra and the Bemidji Symphony Orchestra.  She was named as one of the Bismarck-Mandan Business Watch magazine’s “40 under 40” for making a difference through her work in the region, and was the City Magazine cover story in November of 2011.  In 2009 Dr. Everett was the youngest-ever recipient of the “Friend of the Arts” award for her contributions to the arts in Bemidji. And in 2010 Everett was one of six conductors in the nation to receive an “Excellence in Music Education” award by the American Prize. Everett was one of two recipients of the first 2011 Region 2 Arts/McKnight Career Advancement Fellowship to study with JoAnn Falletta.  Dr. Everett has been a frequent guest conductor and clinician for orchestras and festivals.

​
Everett is passionately committed to working with living composers and commissioning projects. Her most recent project was the Bemidji Symphony Orchestra's opportunity to join the commission consortium along with the Oak Ridge Symphony and the Jewish Orchestra of L.A. to commission composer/conductor Lucas Richman's Symphony: This Will be Our Reply.  This choral/orchestral work, inspired by the famous quote of Leonard Bernstein: "Let this be our reply to violence, to make music more intensely, more beautifully, more devotedly than ever before,"  also served as the theme and grand finale of the orchestra's 80th anniversary season celebration.  Everett and the Bemidji Symphony also recently commissioned composer Tod Machover to write a piece for solo flute and orchestra for Carol Wincenc in honor of Everett's 10th anniversary with the BSO.  "Breathless" was premiered in November 2014 with Ms. Wincenc as soloist and with Tod Machover present in Bemidji.  In April of 2009 Everett conducted the premiere of “Sacred Vows,” a commissioned work by Libby Larsen, celebrating the 70th Anniversary of the Bemidji Symphony. Larsen said of Everett, “I can tell you without hesitation that Dr. Everett IS an ideal Music Director. She is deeply gifted as a conductor, she is deeply committed to music as the articulate language of the soul and she is completely dedicated to the place of the Symphony Orchestra in our 21st Century World.” Everett successfully worked with Chris Brubeck for the premiere of his commissioned work by the Bismarck-Mandan Symphony Orchestra in partnership with the Theodore Roosevelt Center at DSU, “Roosevelt In Cowboy Land,” a symphonic portrait featuring Clay Jenkinson, Roosevelt scholar.  On November 7, 2013 Everett conducted the premiere of newly commissioned work "I Speak of Peace" by Adolphus Hailstork,written for the 2013 Symposium: 50 Years Later: The Legacy of JFK, and performed by the Bismarck-Mandan Symphony Orchestra, the Central Dakota Children's Choir, and Soprano Tammy Hensrud.

Dr. Everett composed the original film scores for the documentary films “The Charisma of Competence,”  on former North Dakota Governor William Guy (2010), and "Mr. Bubble: The Harold Schafer Story."  (2013) Her first orchestral work, "Fanfare for Bemidji" was premiered by the Bemidji Symphony Orchestra on November 11, 2018.

Everett believes in being a positive role model and advocate for young people.  She was invited to be a guest speaker at Cottey College's Institute for Women's Leadership and Social Responsibility to speak on Women's Leadership in the Performing Arts, and received a subsequent nomination to the National Advisory Committee for the Institute, on which she continues to serve.  (Jan. 2012).  She has been a founding Success Coach in the Students First! mentoring program of Bemidji since its inception.  She is a member of PEO Chapter F of Bismarck, and in 2013 was the recipient of the state Shining Star Award.  Everett is a distance runner and triathlete and is a member of the Bismarck "MeFirst" fitness group that promotes fitness by example in the community.

Dr. Everett has collaborated with musicians such as sopranos Korliss Uecker and Tammy Hensrud, violist Brett Deubner, flutist Carol Wincenc, composer and jazz artist Chris Brubeck, rock violinist Aaron Meyer and guitartist Tim Ellis, classical guitarist Petar Jankovic, and pianist André Watts with whom she performed the Rachmaninoff Second Piano Concerto with the Bemidji Symphony in 2008. She holds degrees in organ and conducting from Baylor University, where she was a Presser Foundation Scholar, and from the University of Iowa, where she earned a Doctorate of Musical Arts in Orchestral Conducting and a Master of Arts in Organ Performance and Pedagogy. She studied at the Aspen Music Festival for two consecutive summers. Her principal conducting teachers include Stephen Heyde, Murry Sidlin and William LaRue Jones.